Discovering the Ultimate Hidden, Scenic Dining Spot at the Newburyport Lighthouse in Newburyport, Mass.
Why this special occasions destination is beacons above a typical dining experience
Article by Eric Hurwitz, @newenglandinfo. Story created on 11/12/2019. 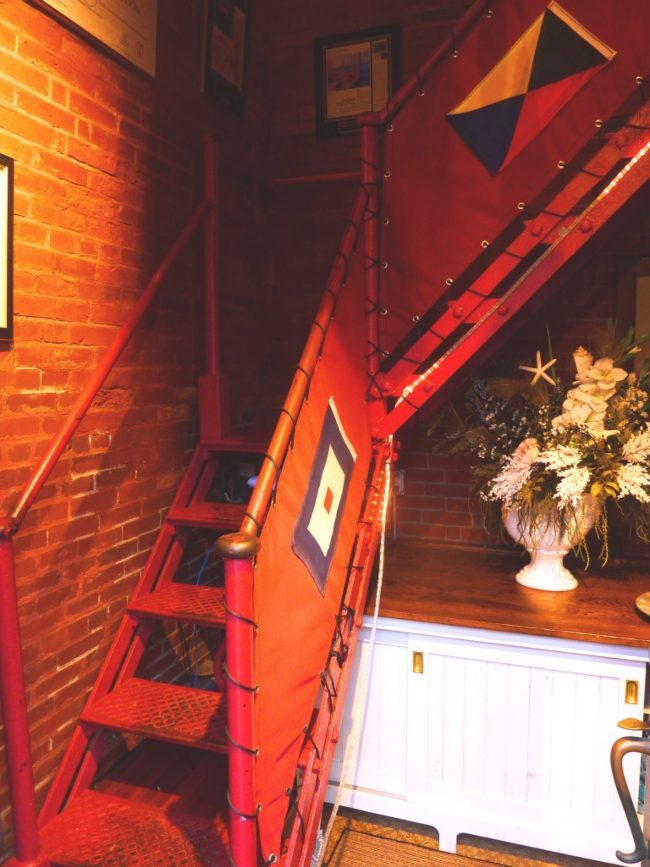 Imagine climbing 55 winding stairs and a six-foot ladder through a narrow hatch, en route to an eight-foot in diameter room at the top of a lighthouse to experience an unforgettable romantic meal with a view.

As lighthouses historically stand out as beacons of strength, security and solitude, so does the dining experience at the Rear Range Lighthouse. It’s just you and your significant other snugly situated in this tiny private glass-enclosed room most popular for proposals, anniversaries and birthday celebrations (there have also been some very small weddings here). Unless claustrophobic or acrophobic, the sweat equity built by arriving at the top of the lighthouse surely reveals one of the best milestone event destination investments in all of New England.

“It’s like a walk-in closet but with million dollar views,” said Hyland. “It is very relaxing up here. People are satisfied and have that Cheshire Cat grin.” 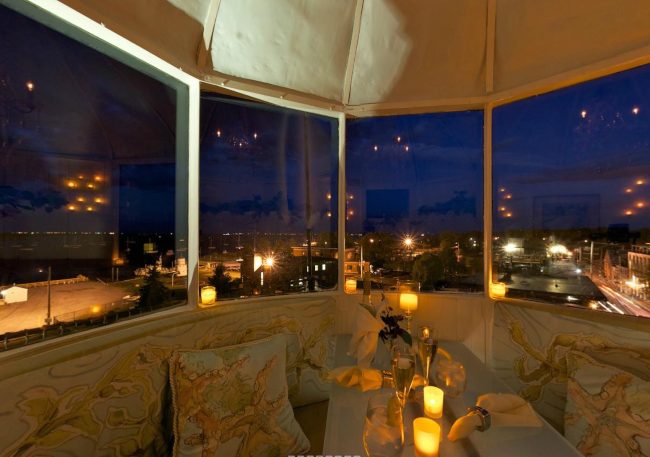 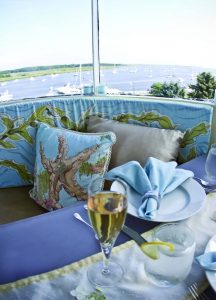 With over 30 restaurants, Newburyport is the North Shore’s mecca for fine dining. Yet the one eatery that receives more media attention and creates more lasting memories is not a restaurant at all, but a lighthouse. The Newburyport Rear Range Lighthouse is that one special find, that one place where if you ask veteran diners to name their most wonderful dining experience, this would be it.

How rare is it that a favorite eating spot is not about the food? And in fact, once you’ve dined there you’ll know that it is not really about the ambiance either. Where else would you be willing to climb 55 stairs, a 6 foot ladder, and go through a hatch to a small (8×8) somewhat claustrophobic space where the only bathrooms are five stories down?

And, by the way, as you’re climbing, you’re carrying your own beverages (it’s BYOB) and music (there’s a CD player). Clearly then, there’s something more to the Lighthouse dining experience or else it wouldn’t be at the top of nearly every New England Must-Do list.

Lisa Hiland of Nahant, VP and team leader of Regan Communications in Boston, thought her boyfriend Nate Bell was taking her on a boat ride last August when they pulled up to the Newburyport Harbor. They were met by James Hyland, president and founder of The Lighthouse Preservation Society, who escorted them up to their “cozy” table set for two. He got the couple situated, they placed their order for a 4-course menu to be provided by Mission Oak Grill, one of five local restaurants that cater to the Lighthouse.

At first, Lisa says, it seemed odd to be dining in such total privacy, but once Nate put on the CD he’d made for the occasion and the couple settled in, they became aware of the uniqueness of this experience. “The 360-degree views were spectacular,” Lisa recalls. “Beautiful Newburyport Harbor, the downtown, the sunset giving way to the moon – you can’t help but have a good time.” Between courses, the couple crawled (literally) out onto the deck where Nate popped the question.

The Lighthouse was opened to diners in an effort to raise money for lighthouse preservation. There is, in addition to the cost of the dinner, a $350 fee that goes to the Preservation Society. But what you’re paying for is more than dinner in a creative venue. It is dining in an historic landmark with the New England sea, its craggy coast, a quaint village, and an ever-changing sky as the backdrop.

Dine at the Top of the Lighthouse

You’re invited to a once-in-a-lifetime experience that is offered no where else in the world – a gourmet meal at the top of a lighthouse with a breathtaking panoramic view!

What a great way to spend the anniversary with the one I love. A unique experience to always remember.

33rd anniversary. My husband truly surprised me with this beautiful thoughtful lunch spot for our anniversary.

Was a blast treating my wonderful wife to this surprise dinner. Try not to take the little things for granted. Live life to the fullest!!!

My husband surprised me and took me to the Lighthouse for dinner for my 30th birthday. The food was amazing and the views are beautiful.

We enjoyed a wonderful dinner and had an awesome experience. Thank you.

Today we are enjoying a wonderful lunch in memory of my Dad who passed away last year. He loved Lighthouses and would have enjoyed dining here.

We are all happy to be in this small space to enjoy good company and listen to Billy Joel from Pandora and excellent food all enjoying this day together.

This is the top of the world!!! Janet and I came to celebrate my 50th birthday today (which I was very depressed about) but now I am ready to embrace my 50’s and beyond.

We were on top of the world for 4.5 hours. Thank you! It was worth every penny and it goes to a great cause. GO LIGHTHOUSES!

We had a wonderful dinner! Kim was a wonderful server and she was extremely thoughtful. The sunset was beautiful, and the Lighthouse had all of the extras covered – music, heat/ac, binoculars, etc. The Eggplant Parm and Strawberry Shortcake were both especially delicious. One-of-a kind experience! Would love to return.

For the ultimate romantic dinner, you can’t top this table. It’s been called the most private and exclusive dining space in New England, but you don’t have to be a celebrity to have dinner in this gorgeous glass room at the top of a beautiful lighthouse.

Only in Your State

It was by far the most romantic dinner we have had in our nearly 39 years together. Thank you so much!

My wife said that besides having children, it was one of the best times of her life!

“If you’re romantically inclined, it doesn’t get much better,” and described the dining room at the top of the lighthouse tower as “a glass-encased love nest… that feels like the top of the world.”

Live Cam from the top of the Newburyport Rear Range Lighthouse 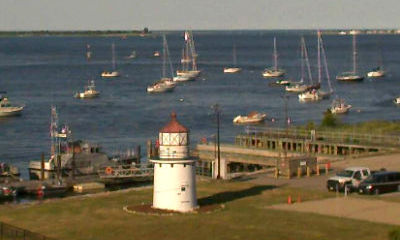 Get Your Lighthouse News