The Lighthouse Preservation Society was hired by Microsoft to write the definition for “Lighthouses” in their Encarta Encyclopedia. Here is the definition that was written by the society’s president and founder, James Hyland:

A lighthouse is a structure from which light is projected at night, or which serves as a marker by day, to guide ships sailing in coastal waters. Lighthouses are constructed at important points on a coastline, at entrances to harbors and estuaries, on rocky ledges or reefs, on islands, and even in the water.

Lighthouses help identify a ship’s location, warn ships of potential hazards, and notify them that land is near. Lighthouses differ from smaller beacons in that a lighthouse includes living quarters for a lighthouse keeper. Today, however, most lighthouses use automatic electric lights that do not require a full-time resident operator.

The Lighthouse Preservation Society is the nonprofit organization that has made lighthouse preservation a national issue with Congressional hearings, conferences, the sponsorship of National Lighthouse Day and its celebrations, the nomination of 30 U.S. lighthouse stamps, and raising nearly $6 million for over 160 lighthouse projects.

This prestigious group is also the recipient of a Presidential Achievement Award from the federal government for its efforts to preserve our lighthouse heritage.

Specifically, the Society’s accomplishments include:

Dine at the Top of the Lighthouse 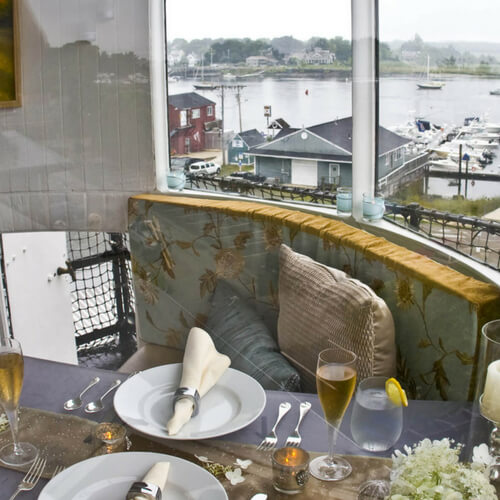 You’re invited to a once-in-a-lifetime experience that is offered no where else in the world – a gourmet meal at the top of a lighthouse with a breathtaking panoramic view!

What a great way to spend the anniversary with the one I love. A unique experience to always remember.

33rd anniversary. My husband truly surprised me with this beautiful thoughtful lunch spot for our anniversary.

Was a blast treating my wonderful wife to this surprise dinner. Try not to take the little things for granted. Live life to the fullest!!!

My husband surprised me and took me to the Lighthouse for dinner for my 30th birthday. The food was amazing and the views are beautiful.

We enjoyed a wonderful dinner and had an awesome experience. Thank you.

Today we are enjoying a wonderful lunch in memory of my Dad who passed away last year. He loved Lighthouses and would have enjoyed dining here.

We are all happy to be in this small space to enjoy good company and listen to Billy Joel from Pandora and excellent food all enjoying this day together.

This is the top of the world!!! Janet and I came to celebrate my 50th birthday today (which I was very depressed about) but now I am ready to embrace my 50’s and beyond.

We were on top of the world for 4.5 hours. Thank you! It was worth every penny and it goes to a great cause. GO LIGHTHOUSES!

We had a wonderful dinner! Kim was a wonderful server and she was extremely thoughtful. The sunset was beautiful, and the Lighthouse had all of the extras covered – music, heat/ac, binoculars, etc. The Eggplant Parm and Strawberry Shortcake were both especially delicious. One-of-a kind experience! Would love to return.

For the ultimate romantic dinner, you can’t top this table. It’s been called the most private and exclusive dining space in New England, but you don’t have to be a celebrity to have dinner in this gorgeous glass room at the top of a beautiful lighthouse.

Only in Your State

It was by far the most romantic dinner we have had in our nearly 39 years together. Thank you so much!

My wife said that besides having children, it was one of the best times of her life!

“If you’re romantically inclined, it doesn’t get much better,” and described the dining room at the top of the lighthouse tower as “a glass-encased love nest… that feels like the top of the world.”

Live Cam from the top of the Newburyport Rear Range Lighthouse

Get Your Lighthouse News